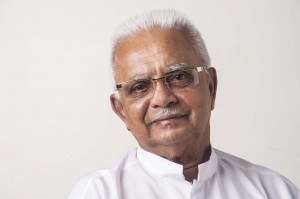 Born November 5, 1931, Dr. Ahangamage Tudor Ariyaratne is the founder of the Sarvodaya Shramadana Movement of Sri Lanka. A former high school teacher at Nalanda College, he conducted the first shramadana work camp in 1958, which eventually lead to the establishment of the largest non-government organization in the country. The father of six distinguished adult children, he has led tens of thousands of â€œfamily gatheringsâ€ and meditations with millions of people throughout Sri Lanka and other parts of the world.

Â â€œIn this voluble, diminutive dynamo I found a scholar-activist who took the social teachings of the Buddha seriously and dared to believe that they could inspire change in the modern world. He had banked his life on that conviction, drawing from ancient traditions to empower what he called â€œthe poorest of the poor.â€’

The seven volumes to date of A.T. Ariyaratneâ€™s Collected Works provide a comprehensive collection of his speeches and writing in more than 1200 pages.Â To read the introduction pleaseÂ click here. The entire Collected Works are available for purchase through Sarvodaya USAÂ Â for 60 USD.