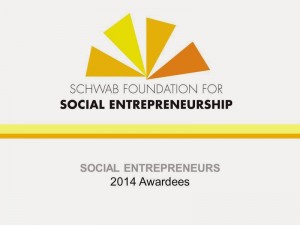 The founder and General Secretary of Sarvodaya Sri Lanka, Dr A.T. Ariyaratne and Dr Vinya Ariyaratne have been recognised as the Social Entrepreneur for the Year 2014. The award organised by the Schwab Foundation and the World Economic Forum recognised thirty seven social entrepreneurs working in health, education, employment, and the environment operating in over 20 countries. These individuals and organisations join the Schwab Foundation network of outstanding social entrepreneurs.

This prestigious award is in recognition of the work done under the banner of social entrepreneurship through the Sarvodaya Organisation. Sarvodaya has a vision of a new social order in a society with no poverty and no affluence based on Gandhian values of truth, non-violence, and self-sacrifice. Such a society is governed by the ideas of participatory democracy with decentralized power and resources (Deshodaya), in which basic human rights and basic needs are sacred and people nurture the natural environmental in which we all live.

The Social Entrepreneurs of the Year 2014 winners were selected in recognition of their innovative approaches and potential for global impact. During a livecast session at The Huffington Post, announcing the winners, Hilde Schwab, Co-Founder and Chairperson, Schwab Foundation for Social Entrepreneurship said “Social entrepreneurs are the driving force behind innovations that improve the quality of life of individuals around the world, and they represent an integral and dynamic community of the World Economic Forum”. “It therefore gives me great pleasure to announce the 2014 Schwab Social Entrepreneur awardees. The 37 outstanding social entrepreneurs we have selected into the Schwab Foundation community this year are designing transformative models in collaboration with government and business partners to generate truly inclusive growth.” 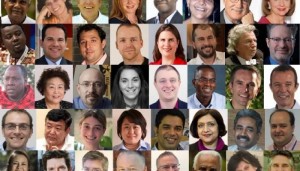 “A growing number of corporations see income inequality and environmental problems like climate change as fundamental threats to their long-term growth,” said David Aikman, Senior Director, World Economic Forum, and Head, Schwab Foundation for Social Entrepreneurship. “Many governments are starting to rethink the way they deliver goods and services that improve social outcomes. We are seeing greater appetite among other stakeholder groups of the Forum to learn from social innovation models and collaborate with social entrepreneurs in innovative ways. I am confident this trend will only continue to grow in the future, and the World Economic Forum is proud to be at the forefront of catalysing partnerships among these stakeholder groups for social and environmental change.”

‘Awakening of All’ is the literal meaning of ‘Sarvodaya’. The organization has met the emerging needs of our people for over fifty years: breaking down barriers of caste and class (1958), responding to the aftermath of the Tsunami (2004) and heeding the call for peace during conflict (1983-2009). The ‘scale’ of the issues we address are forever dependent on what our people encounter as our ‘organization’ was borne out of the hearts and minds of the people. Having begun on village soil they remain firmly rooted in the village ethic. Currently, comprising of twenty-six district centers with a reach of nearly 15,000 villages they have guided former education, economic and womens’ programs to become organizations in their own right.

Sarvodaya has an alternative grassroots model of development that has an ethos of volunteerism at its core and delivers all activities through a localized network. Their activities and strategies stem from the concept of awakening (Sarvodaya) and are reinforced by gifting of one’s labor (Shramanda). For Sarvodaya, ‘transformative change’ is a simultaneously engagement of individual, community, national and global arenas. The range of the activities undertaken reflect these four arenas and the many facets for change – economic, social and political– that impinge on both individuals and societies.

The Schwab Foundation for Social Entrepreneurship was cofounded by Klaus Schwab, Founder and Executive Chairman of the World Economic Forum, and his wife, Hilde. Since its inception in 2000, the Foundation has been identifying the world’s leading social entrepreneurs and involves the community of 200 award winners in advancing social innovation in collaboration with corporate, government and academic stakeholders. Selected social entrepreneurs of the Schwab Foundation network participate in World Economic Forum events, thus providing unique opportunities for them to connect with business, political and media leaders.

The World Economic Forum is an independent international organization committed to improving the state of the world by engaging business, political, academic and other leaders of society to shape global, regional and industry agendas. Incorporated as a not-for-profit foundation in 1971 and headquartered in Geneva, Switzerland, the Forum is tied to no political, partisan or national interests.

For more information on Schwab Foundation and its Social Enterprenuership Award visit www.schwabfound.org

Error: An access token is required to request this resource.
Type: OAuthException
Solution: See here for how to solve this error