Justice C.V. Wigneswaran attends the 57th AGM of Sarvodaya as the Chief Guest

â€˜Peace cannot be achieved without a change of heart. This change of heart comes when the pivot of decision making in one’s life shifts from the self to an ambience of love pervading all around us. There is natural good will, concern and love in the hearts of all human beings but most often untappedâ€™ mentioned C.V. Wigneswaran, the Honorable Chief Minister of the Northern Provincial Council and former Judge of the Supreme Court of Socialist Republic of Sri Lanka, addressing the 57th Annual General Meeting of Sarvodaya Shramadana Movement as the Chief Guest on 21st December 2013.

The General Secretary of Sarvodaya Dr. Vinya Ariyaratne convened the AGM and a large number of Sarvodaya members were present at Vishva Samadhi Hall in Moratuwa to elect their new office bearers in addition to the other formalities of the AGM.

Dr. A. T Ariyaratne, the Founder-President of Sarvodaya Shramadana Movement warmly welcomed the Chief Guest of the event, Justice Wigneswaran mentioning that Sarvodaya is privileged to have Justice Wigneswaren as the Chief Guest of the event as this has been his first ever official function in the South of the country after he assumed the duties as the Chief Minister of the newly elected Northern Provincial Council. He also commented on the rumors of the Chief Minister of the Northern Provincial Council refusing to hoist the National Flag of Sri Lanka.

The winners of the all-island art competition held by Sarvodaya to promote reconciliation in Sri Lanka were also awarded their certificates and cash prizes on the occasion. 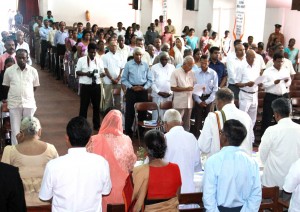