World Day of Prayer and Action for Children celebrated on 20th November, 2011

At a time when reports of violence against children are often featured by local media, Sarvodaya along with partners UNICEF, Department of Probation and Child Care and others organized a celebration to commemorate the 22nd anniversary of the Convention on the Rights of the Child (CRC) as the World Day of Prayer and Action for Children. Â Recognized worldwide as the Universal Chidrenâ€™s day and the International Day of Rights of the Child, 20th November is a day when organizations working with Children renew their commitments towards protection of children.

This the main celebration held in Sri Lanka on the day, focused on the theme of ending all forms of violence against Children and engaged over 200 children representing the four main faith communities in Sri Lanka and with over 100 representatives from various organizations working for and with children .

Speaking further on the role of the religious communities, he went on to say â€œIn each religion there is a prayer, recitals, meditation or moments of spirituality where we can channel our spiritual energy towards the wellbeing of children. Prayer in itself is not enough, we must also covert our spiritual motivations into practical action for the protection for children. If our religious leaders, religious institutions and spiritual organizations also join in the efforts of the government institutions with such action we can make good progress towards ending violence against children in Sri Lanka.â€

Dr. Vinyaâ€™s speech was followed by the main highlight of the programme, an interfaith prayer for children.Â  Ven. MadampagamaÂ AssajiÂ Nayake Thero representing the Buddhist tradition, Pravrajika Sushanthaprana Matha-ji and Pravrajika Athmadevaprana Matha-ji representing the Hindu tradition, Moulavi M.F.M. Farood Ihsani and Moulavi J.A. Hibatullah from the Islamic faith and Father Anura Perera representing the Christian faith showed solidarity among faith groups in standing together on stage to lead the participants in blessings and prayer for the protection of children from all forms of violence. The interfaith prayer ended with a minute of silence in memory of all children whoâ€™ve suffered from violence over the past years.

In highlighting the issue of violence against children that takes place in Sri Lankan society, the National Commissioner of the Depart of Probation and Childcare, Mr. Sarath Abeygoonawardena said â€œIn currently society violence, abuse and harassment of children is a key challenge we are facing.Â  The traditional safety net of the family to protect the child is no longer as strong. This is not only in Sri Lanka but we share this challenge with our neighbouring countries of SAARC. Increasingly, the very entity that protected the child in the past, the family has become a place where violence against children takes place. Whether it be from an immediate family member or a relative we have there are many cases of physical, mental and sexual abuse of children taking place â€œ.

Continuing his speech Mr. Abeygoonawardena, who is also the national coordinator of the South Asian Initiative for Violence against Children (SAIEVAC), went on to highlight that primary settings where violence against children takes place include the family, the school, the community and child development centres. He also mentioned the prominent role that media has come to play in the lives of children, and the high occurrences of violence brought to the daily lives of children through various media. 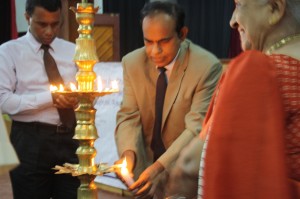 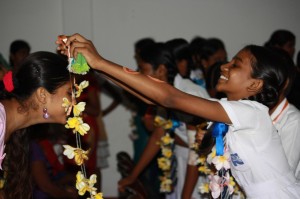 Dr. Hemamal Jayawardena, a Child Protection Specialist at UNICEF spoke to the many children in the audience of the importance of developing their personal capacity, to be able talk and build relationships with parents a strengthening ones safety net.

The self defense display lead by Sensei Indishe Senanayake proved to be both entertaining and educational for the children with few simple self-defence techniques introduced to all.

Ms. Rashmi Vidyani, a 17 year old committee member of the National Childrenâ€™s Council and a Child Representative on the Governance Committee of SAIEVAC spoke representing Children. She highlighted the importance of a participatory and empowering approach towards ending violence against children saying â€œAll children should have the right to experience a happy childhood and it is a responsibility of all to stand against such occurrences. Instead of breaking their winds we should give them wings to fly !â€ 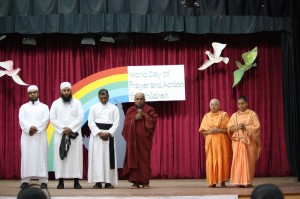 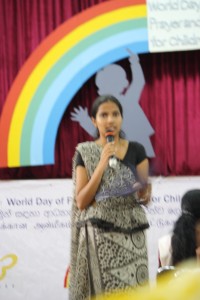 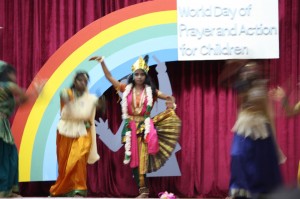 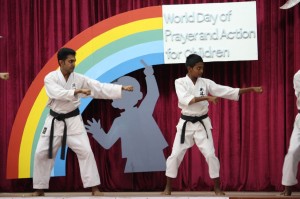