The lives of over 1.2 million people in Eastern and North-Central provinces of Sri Lanka have been hard hit by the second round of floods from the 3rd of February 2011 with 1,161 houses fully and 8412 houses partially damaged. The long-term effects on the Sri Lankan economy will be great with over 500 minor tanks and irrigation canals damaged and over 200,000 acres of paddy land inundated.

This second disaster is even before communities could recover from the previous floods from January 2011 that affected many areas in the Eastern and North Central provinces.

North Central province including areas of Anuradhapura, Vavuniya, Mannar and Padaviya is facing its biggest disaster in recent history with extensive flooding. Districts like Kandy, Nuwaraeliya, Mathale and Baddulla in the central highlands are facing disaster situations with earth slides displacing many people.

In this emergency situation Sarvodaya is strengthening its relief work to reach the most vulnerable communities. In affected districts, Sarvodaya Districts have mobilized themselves with support to provided cooked meals for displaced persons living in formal and informal camps. We are grateful to a number of individuals and organizations who responded to our appeal to support Sarvodaya relief efforts.

In Batticaloa, with support from Malteser International and the German Foreign Office, Sarvodaya is working with local authorities to provide safe drinking water to affected communities by operating water bowsers. Cooked meals have been provided to 2,000 persons in six IDP camps from dinner on 3rd February up to 6th February. Also four camps accommodating 457 persons in Kalawanchikudi D/S division have been provided with dry rations to prepare their own meals for 4th February for Dinner and all meals for 5th February.

In Vavuniya, over 3000 persons in the villages of Thandikulam, Moonrumurrippu, Mathavuvaithakulam, Nagar Illupaikulam, Kalkunamadu, Aluthgama have been provided with cooked meals on 4th and 5th of February. 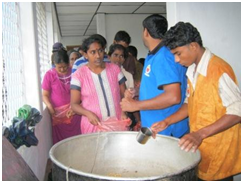 1,000 rupees (less than $10) can provide enough food to feed a family of five for two days, and Sarvodaya is preparing packages containing: 5kg rice, 1 packet of milk powder, 100g tea leaves, 1kg sugar, 1kg lentils, 1kg potatoes, salt, spices and 2 coconuts. These packages will be distributed in the villages where families are able to remain at home.

In the villages where flooding has forced people to abandon their homes, Sarvodaya staff are bringing cooking utensils and food supplies to community centers, so that hot meals can be prepared and distributed.
Sarvodaya is seeking donations to provide food, clothing and blankets; medical supplies; sanitary items; and tents or other forms of temporary shelter. Sarvodaya â€“ JDC Community Disaster Management Centre (S-J-CDMC) in Moratuwa is operating around the clock to coordinate the relief efforts.