The 16th Annual National Awards Ceremony of Sarvodaya Trust Fund was held on 08th November, 2009 at Sarvodaya Vishva Samadhi Conference Hall. Mr. Neil Buhne, the United Nations Resident Coordinator in Sri Lanka was the Chief Guest of the occasion. This year, the Sarvodaya Trust Fund felicitated six most outstanding personalities of the Sri Lankan society, honoring their advancement of humanity, development and peace. 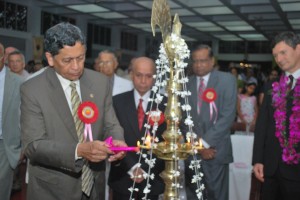 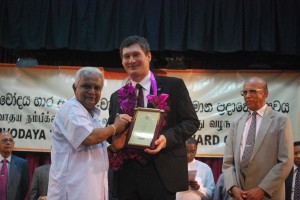 Dr. A.T. Ariyaratne welcomed the distinguished guests and mentioned how rare it is to find people of this caliber like these awardees in todayâ€™s society.Â  After three decades of brutal war, the awardees have demonstrated perseverance in the name of peace, coexistence and development.Â  Distinguishing the efforts of these individuals is important to recognize in the current context of establishing ethic harmony among all communities.Â  He also mentioned that Sarvodaya will continue its efforts to empower the village communities to lead towards Grama Swaraj through its Deshodaya initiative. 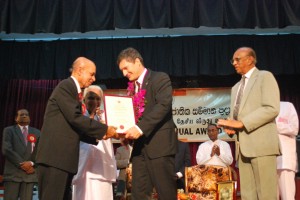 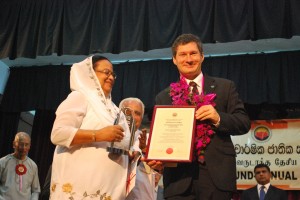 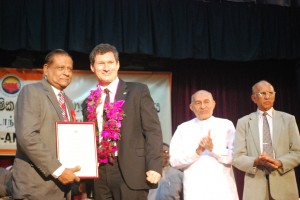 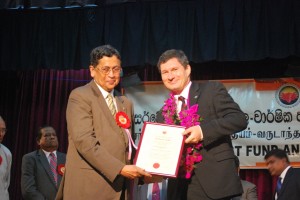 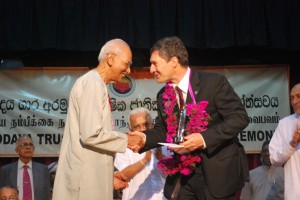 The chief guest for the event Mr. Neil Buhne, UN Resident Coordinator, during his speech mentioned how he studied about Sarvodaya as the best example for fighting poverty while empowering people and communities 25 years back.Â  He conveyed how Sarvodaya has used the principles of peace, unity and brotherhood and applied it through communities.Â  Like in all places when a war is finished, doing this is not easy.Â  There are wounds to be healed, there is trust to build.Â  He stated that there is much work to be done after a war in order to establish normalcy in the lives of the affected people, however with partnership amongst the government, UN, INGOs, and NGOs, like Sarvodaya who is a leader in uplifting people through village development, he is confident that obstacles will be overcome and peace and development will remain.

Professor Carlo Fonseka is a scholar in medical science and a recognized public speaker.Â  As a keynote speaker he referred to the UN Charter and stated that the war is created in the minds of the people and to finish the war you need to finish it off in the minds of the people. He stated that many people have changed the imprint of the world but for peace Dr. A.T. Ariyaratne would be amongst the honored.

The vote of thanks on behalf of the awardees was from Jezima Ismail.Â  She was awarded in appreciation for her services in establishing womenâ€™s organizations. She mentioned how she has received many awards but this one in particular is greatly valued to her.Â  She noted how the award ceremony completed with great success.

The Governor of the Western Province Hon. S. Alavi Maulana was also present at the occasion.