Sarvodaya in partnership with the Chefs Guild of Lanka launched the programme ‘Joining Hands’ to develop a feeding programme initially for 10,000 IDPs accommodated in Manik Farm Zone 2, in Settikulam, Vavuniya district. The feeding programme does not only provide the IDPs with 30,000 hot and nutritious meals per day, but also develops different sets of menus and trains 150 IDP youth, both boys and girls, while assisting the world class chefs in the feeding programme. This will enable the youth themselves continuing the programme afterwards and also provides an invaluable experience to them that empower the talented youth among IDPs in employment opportunities in the hospitality industry.

The programme was launched in the Colombo Hilton recently in the presence of large gathering including the chefs from both city and resort hotels, the General Managers of Five Star Hotels, Sarvodaya representatives and media personnel. The guests at the launch were welcomed by Jerome Auvity, the General Manager of Colombo Hilton. Dr. Vinya Ariyaratne, the Executive Director of Sarvodaya Movement and Gerard Mendis, the Chairman of the Chefs Guild of Lanka explained the commitment of both organizations in this valuable exercise. Sharadha de Saram, the Programme Consultant to Give2Asia who has been the facilitator between the Chefs Guild and Sarvodaya for this noble effort also spoke at the occasion. 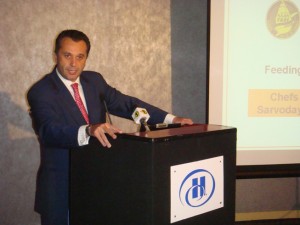 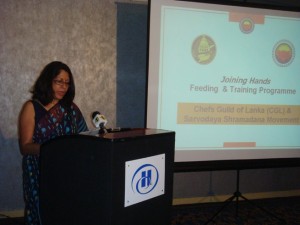 The dry rations for cooking are provided by the World Food Programme and the supplementary foods and other items are expected to be provided by a number of city and resort hotels, Sarvodaya Shramadana Societies island wide, other interested parties including organizations and individuals. 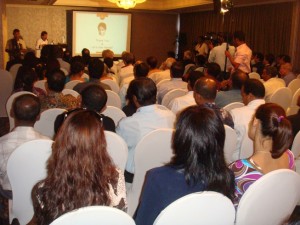 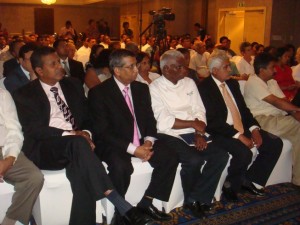 Chefs Guild of Lanka is a non-political organization founded in 1988, nominated as the 37th Member Nation of the World Association of Cooks Societies in 60 countries. There are 850 chefs representing both city and resort hotels are members of Chefs Guild of Lanka.