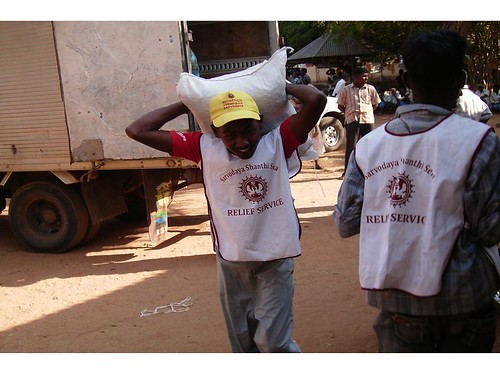 Sarvodaya has been in the forefront of the recent emergency response to the massive displacement in north. The organization, working through its district centres in Vavuniya, Mannar and Padaviya, rallied the support of many different donors and dipped in its own resources to provide food and non-food items to the thousands of displaced families now living in camps.

During the early months of 2009, Sarvodaya concentrated its efforts on providing food relief to those who had escaped the conflict in the north. Both cooked food and dry rations were provided.

In January and February, a total of 45,000 cooked food parcels were distributed to Nellukulam and Tamil Maha Vidyalayam IDP Camps in Vavuniya. Of these 7500 parcels were supported by NCA (Norwegian Church Aid) and 37,500 by CHA (Consortium of Humanitarian Agencies)

Sarvodaya provided continuous support to Saivapragasa Vidyalayam where over 1,200 families are taking refuge. At this camp, Vavuniya District Centre of Sarvodaya has organized communal cooking with the participation of IDPs and Sarvodaya Shanthi Sena volunteers and distributing food parcels to the entire camp population from February 26 onwards. Over 180,565 parcels have been distributed over the past two months. These efforts have been supported by many donors including NCA and Malteser International.

To make life more tolerable in camps set up for the internally displaced in Vavuniya, Mannar, Jaffna and Padaviya, Sarvodaya provided a range of relief items from soap to shoes to sheets through emergency funds mobilized through donors including the private sector.

In Mannar 530 kits for pregnant mothers, 1,150 children infant kits and 220 family kits were distributed in camps where Sarvodaya is operating, mainly in Nannattan division. In addition some 884 food relief items and 172 NFRI packs which included dry food, women’s and men’s clothes and sanitary items were distributed to IDP families in camps in Nannattan and Mannar divisions in Mannar district

“We are closely working with other partners such as government agencies, the United Nations system, international and national NGOs and importantly, the IDPs themselves. We are making every effort to respond to the needs on the ground in a systematic way and in conformity to International Humanitarian Standards,” Sarvodaya’s Executive Director said.

In addition to providing food and non-food relief items, Sarvodaya is engaged in improving water and sanitation services in camps in both Vavuniya and Mannar districts. More than 250 temporary latrines have been constructed and 20 water-filters installed for safe drinking water. A water treatment plant was provided to Manik Farm Zone 3 which provides 50,000 liters of treated water daily.

In an attempt to support some families to return to livelihood, bicycles, fish boxes, fishing nets and weighing scales were provided to 118 families in Nannattan.

Sarvodaya has engaged a large number of volunteers to meet the urgent manpower demands of the emergency response. More than 1500 Sarvodaya Shanthi Sena volunteers operate daily- over a 1000 in Mannar and 500 in Vavuniya.

In addition to those district centres in the frontline- Mannar, Vavuniya and Padaviya- other centres across the country are supporting the relief operations. The other district centres engaged are Jaffna, Kilinochchi, Padaviya, Anuradhapura (West), Kalutara, Monaragala, Hambanthota.

“On-the-ground activities have been assigned to various teams involving Sarvodaya staff of District Centers of Vavuniya, Mannar, Killinochchi, and Padaviya, with necessary technical and administrative support from the Specialist Units of Sarvodaya Headquarters,” said Dr. Ariyaratne. “The Deshodaya and the Field Operation divisions are directly coordinating the field level activities involving the IDPs.”

The Executive Director and the senior staff maintain close coordination at the national level.

At the Movement’s Moratuwa Headquarters an Emergency Operations Centre was set up to maintain round-the-clock communication lines between Vavuniya and Mannar District Centres, coordinate requests for support, supplies and logistics including management of NFRI stocks.