The Government of Japan has provided US$ 87,651 through the Grant Assistance for Grassroots Human Security Projects (GGP), to Sarvodaya to ensure food security to the resettled Internally Displaced (IDP) families in the Batticaloa District in the Eastern Province. The Batticaloa project will also provide help to IDP families to enhance income sources in Manmunai South West to get back to normalcy. The project will construct two irrigation channels and 16 Agro wells to benefit around 1300 families in total.

The Government of Japan through its Grant Assistance for Grassroots Human Security Projects (GGP) annually funds several Non-Governmental Organizations (NGO) and agencies operating at the local level to fulfill development needs at grass roots level of all Sinhala, Tamil, and Muslim communities living throughout Sri Lanka. This scheme has been in operation in Sri Lanka since 1989, and has so far provided vast support towards a multitude of development and humanitarian activities at village, district, provincial and also at national level. This is the second grant given to Sarvodaya this year by the Japanese Government. In February 2008, the Government of Japan extended the GGP assistance for livelihood and food security projects to the conflict affected communities in Vavunativu and Vaharai divisions, also in the Batticoloa District through Sarvodaya. These projects are being implemented very effectively and the people in the district are already getting benefits from the projects.

The signing of this Grant Contracts took place at the Embassy of Japan, Colombo, on 8th August 2008. His Excellency, Mr. Kiyoshi Araki, Ambassador of Japan in Colombo, together with Dr. Vinya Ariyaratne, Executive Director of Sarvodaya signed the Grant Contract. 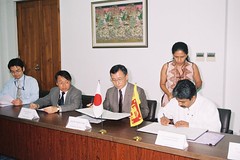 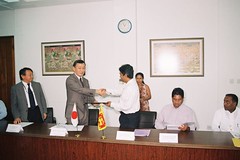 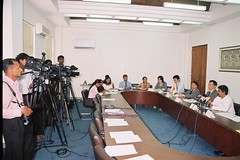 Dr.Vinya Ariyaratne speaking to the Press at the Signing Ceremony