Initiated in 1958, as a shramadana programme in Kanatholuwa, an underdeveloped village, Sarvodaya Shramadana Sangamaya has implemented an avalanche of physical, social, economical, cultural and spiritual programmes for people living in every nook and corner of Sri Lanka covering 15,000 villages. The Womenâ€™s Movement in conjunction with the International Womenâ€™s Day has organized a Convention on 7th March, 2008 from 2 p.m. onwards at the Moratuwa Sarvodaya Headquarters to celebrate this event. Around 1500 grassroots women from all districts, including the North & East, will attend this programme. In addition, the people involved in womenâ€™s activities through-out the country will attend the programme. Eminent speakers are scheduled to speak on identified problems of women in Sri Lanka â€“ the Director, Womenâ€™s Movement, Seela Ebert states. 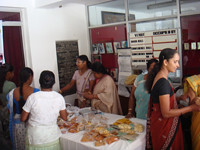 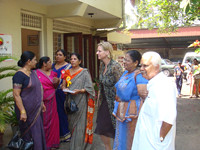 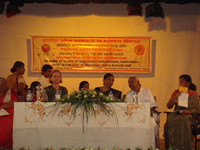 The keynote address on 50 years of community service of the Sarvodaya Shramadana Sangamaya will be delivered by the Founder and the President of Sarvodaya, Dr. A.T. Ariyaratne. The Chief Guest, Mrs. Indrani Sugathadasa, Secretary, Ministry of Child Development & Womenâ€™s Empowerment will focus on â€œEqual Opportunities for Women when Allocating Funds for Developmentâ€, the International Theme for this yearâ€™s celebrations. The eminent speakers who will give their views on womenâ€™s problems will be Prof. Lorna Devarajah, who will speak on â€œHistorical Perspective of Sri Lankan Womenâ€ and Deshabandu Mrs. Jezima Ismail on â€œThe Importance of being a Womanâ€. Mrs. Indrani Iriyagolla, an eminent researcher and trainer, will talk to the people on â€œPolitical Participation of Womenâ€. Mrs. Saroja Sivachandran from the Centre for Women & Development, Jaffna, will give her â€œView-Point of Displaced Womenâ€. This will be followed by a dialogue on personal experiences of women in conflict-prone areas by Malini Seneviratne, District Co-ordinator of Padaviya and Annapoorani Sundararajah, Womenâ€™s Co-ordinator, North & East.

The highlight of the day will be the 2 short plays produced especially for this occasion by the Sarvodaya Womenâ€™s Movement. The Panadura Ranga Kala Ayathanaya will perform â€œViyali Seethalaâ€ a drama depicting the problems of migrant women and the social problems faced by their families. The Lanka Childrenâ€™s & Youth Theatre Foundation will perform the play â€œSriya Kanthawaâ€ depicting the general problems faced by women in the country.

The dayâ€™s programme sponsorship is by the Government of Norway and the American Centre.

The Most important events of the day will be : the launch of the Family Link-Up Programme for 2008 funded by Sarvodaya Germany under the leadership of Heide Broll, to give micro-grants for 50 poverty stricken women (widows and destitutes) from the 25 districts to assist in their livelihood programmes; and the launch of the Foster Parents Scheme for 50 displaced children in the Padaviya district who are living in camps due to the conflict situation.

Dr. A.T. Ariyaratne whose brain child was the creation of the Sarvodaya Womenâ€™s Movement 20 years ago, will be felicitated on this day for his yeoman services to the country.