The first-ever research publication by Fusion, titled â€œNoise at the Last Mileâ€, has been ceremonially launched at the Partnership Pavilion at GK3 Malaysia. The research publication, which was dedicated to the late Prof. V. K. Samaranayake, is a synthesis of multiple socio-anthropological and technological research projects carried out by four independent research teams on two â€˜Virtual Villagesâ€™ implemented in Meewala of the Gampaha district and Kuda Oya of the Nuwara Eliya district in Sri Lanka. 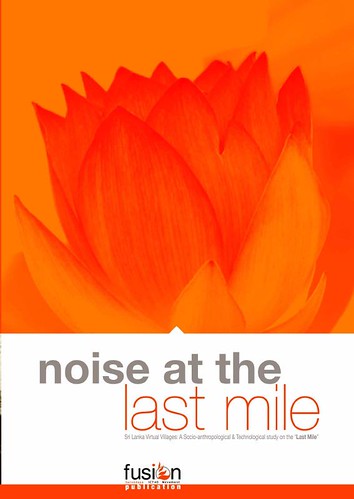 Late Prof. Samaranayakeâ€™s extensive contributions to the ICT sector were acknowledged with great respect by the guests invited to the occasion, where the book was presented by Executive Director of Sarvodaya Dr. Vinya Ariyaratne to Prof M. S. Swamainathan, Chairman of MSSRF of India; Prof. Michael Clarke, Director of ICT4D of IDRC, Canada; Dr. Laurent Elder, Managing Director of Pan Asia of IDRC and Dr. Richard Fuchs, Regional Director of East Asia of IDRC.

Representing the partner institutions were Mr. Harsha Wijewardane of the University of Colombo, School of Computing, Dr. Ananya Raihan, Director of D.Net Bangladesh, and Mrs. Leelangi Wanasundera, Director of the Centre for Women Research (CENWOR). Mr. Phet Sayo and Mr. Frank Tulus of IDRC also attended the event, which was sponsored by IDRC Pan Asia.

Global Knowledge 3rd Conference, held in Kuala Lumpur, Malaysia from the 11th to the 13th of December, was the largest ICT for Development gathering of 2007, and involved the participation of over 1500 global community. The conference was organized by Global Knowledge Partnership (GKP), on which Fusion is the elected Regional Coordinator for South Asia.

In addition to the book launch, Fusionâ€™s exhibition stall providing information about Virtual Village project achievements and the other on-going projects of Sarvodaya-Fusion was a major attraction at the event.

The GKP-South Asia Pavilion, organized by Fusion with the sponsorship of ICTA of Sri Lanka, demonstrating the partnership spirit of ICTA and Sarvodaya-Fusion has been admired by many regional members.

Two short films about Fusion were shown during the ICT4D Film Festival organized by CSDMS of India as a pre-event on the 9th and 10th of December.

Dr. Harsha Liyanage, Managing Director of Fusion, and Dr. Vinya Ariyaratne participated in panel discussions on the broader contributions of Sarvodaya in the ICT4D sector. Among many publications, four books launched at GK3 presented the diverse ICT4D project engagements of Sarvodaya.