Dr. A. T. Ariyaratne, a Gandhi International Peace Prize winner who has dedicated his life to the non-violent transformation of societies beginning with his war-torn homeland of Sri Lanka was recognized as an Hon. Orary Fellow of the University of Bridgeportâ€™s International College for his lifelong efforts for peace work. 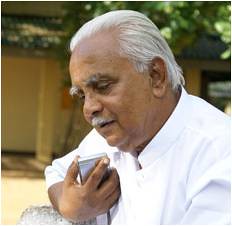 Dr. Ariyaratne has played an important role in reducing tension between the government of Sri Lanka and the Tamils in his country that has been torn by civil war for decades. Sarvodaya, the international organization that he founded is a community based movement inspired by Gandhian thoughts and Sri Lankan Buddhist tradition. Active in 15,000 villages in Sri Lanka, it has become that nationâ€™s largest community organization, working to foster peaceful dialogue, community service and disaster relief including a key role in relief and clean-up efforts following the 2005 Tsunami. Sarvodaya has also provided microfinancing for more than one million Sri Lankans. Ariyaratneâ€™s movement has inspired similar grassroots initiatives in the United States, Europe, Asia and Africa.

For his lifelong example of commitment to peace and dialogue, Dr. Ariyaratne was awarded the Gandhi International Peace Prize for 1996. Other recipients include Vaclav Havel, Nelson Mandela, Coretta Scott King and Desmond Tutu. Dr. Ariyaratne is also a Nobel Peace Prize nominee.