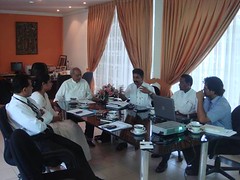 The Draft Deshodaya Vision Declaration which is the result of a series of community level consultations and dialogues facilitated by a group of â€œmobile leadersâ€ or truth seekers was presented to Prof.Tissa Vitharana, the Chairman of the All Party Representative Committee (APRC) and Minister of Science and Technology at his Ministry on 12th April 2007. 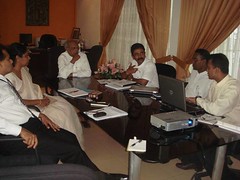 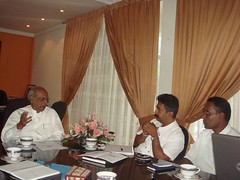 Mr.Chaminda Rajakaruna, Attorney-at-Law, the new Director of Deshodaya (National Reawakening Programme) and Mr.Aruna Jayasena, the Coordinator of the Sarvodaya Peace Secretariat made presentations on the Vision Declaration to Prof.Vitharana.

Dr.Vinya Ariyaratne, the Executive Director and Mr.Subesena De Silva, Deputy Executive Director (Field Operations) were also present at the occasion.APRC is a body appointed by the His Excellency the President of Sri Lanka to present possible proposals to address the national question. The APRC is a body consisting of members of various political parties. Whilst the Committee is yet to come up with its final recommendations, in December last year, the Expert Panel which was also appointed by the President to assist the APRC, came up with two Reports (called and the Majority and minority reports) as the members could not come to consensus on key issues. In January this year, the Chairman of the APRC came up with his own Report which supports the devolution of power to a smaller unit â€“ the village, a concept which Sarvodaya has been advocating (the gram swaraj concept) along the lines of the Panchayat system in India. At the meeting with the Sarvodaya delegation, Prof.Vitharana elaborated on his recommendations.The Vision Declaration was one of the key activities under the 2006 Sarvodaya Peace Action Plan. In May 2006, 15 Mobile Leaders were interviewed, selected and trained to work as community level Mobile Leaders, also known as â€œTruth Seekers,â€ throughout their districts under the guidance of the Sarvodaya Deshodaya Programme. The Vision Declaration which is still an evolving document was the result of hard work done by the 15 mobile leaders at grassroots level to obtain peopleâ€™s viewpoints on the current situation and introduce alternatives to the present structure of governance and conditions of conflict throughout Sri Lanka. Deshodaya Division intends to promote a greater number of discussions on the Vision Declaration in communities in Sri Lanka, which is a crucial element in providing a venue for Sri Lanka to change its current governance structure in order to resolve the underlying issues that are currently dividing the people.