Today, on 14th March 2007, Sarvodaya launched Deshodaya newspaper as part of its new governance and peace initiative to further promote its vision of a new Sri Lanka based on Gram Swaraj or village self governance. 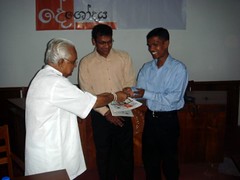 Editor of Deshodaya Newspaper Samantha Sanjeewa and Chaminda Rajakaruna presenting the 1st copy of the paper to Dr.A.T.Ariyaratne, Sarvodaya Leader.

Sarvodayaâ€™s political vision is based on forty years of grassroots work in Sri Lanka for the awakening of all. Sarvodaya has perhaps the only long-term vision for Sri Lanka that serves the interests of the people as a whole regardless of ethnic or religious differences. This vision includes specific change in the governance structure. 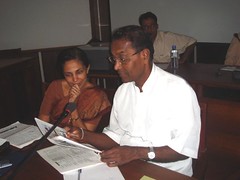 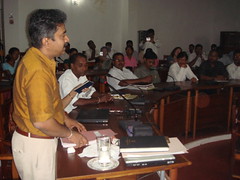 The Executive Council of the Sarvodaya Shramadana Movement decided to initiate the next stage of building the Sarvodaya Social Order in Sri Lanka by initiating Deshodaya (National Re-awakening) programme from 2nd October 2001 to give a national dimension to the Sarvodaya concept of good governance, sustainable development and peace.

Deshodaya was launched by Sarvodaya as the next phase of EMPOWERING PEOPLE. In the Sarvodaya philosophy and practice, empowering people commences with their Personality Awakening, followed by Family Awakening leading to Village Awakening.

An invariable principle in this process is that people decide for themselves and implement their decisions as far as is practically possible. Such decision making and implementation have so far been confined, very largely though not exclusively, within families and communities. Deshodaya implies the continuation of such work enhanced by greater and more systematic co-operation between communities and expanded by intra and inter community activities in new fields.

The newly launched Deshodaya Newspaper will be a platform for dialogue on governance issues from village level up.