Sarvodaya Womenâ€™s Movement(SWM) in collaboration with the Sarvodaya District Centres initiated a disaster relief programme in the Eastern Province to 450 families who arrived in Batticaloa from Vaharai due to heavy fighting. Initially, there were 175 families which increased to 2536 by 1st January, 2007. These persons were originally from Sampur, Mutur, Vaharai, Kattaiparichchan, Vannivattavan, Pachchanai and Ammanasawely who have undergone tremendous hardship due to the ongoing war. Emergency food supplies amounting to Rs 150,000/- were initially provided by the Sarvodaya Women’s Movement pending arrangements for regular food supplies from other sources. Several other NGOs also helped provide basic needs such as, tents, water, toilet facilities, etc. 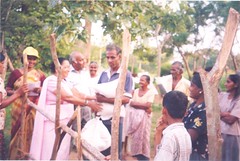 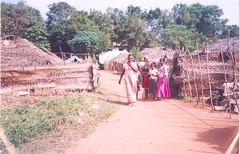 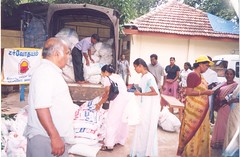 From 6-8th January 2007, SWM also provided relief packs to 755 families and 442 young widows affected by the conflict situation who have been compelled to live in temporary shelters for over ten years in the Vavuniya district. The packs included dry rations such as rice, dhal, canned-fish, tea, sugar and milk powder as well as toiletries, new clothes and foot-wear. The total value of the packs amounted to Rs. 1.4 Million and emergency food supplies were financed through a generous donation from Operation USA which is a Non-profit relief organization providing medical supplies, shelter material, hospital equipment and food supplements to aid victims of disaster and refugees around the world.

The SWM is an arm of the Sarvodaya Shramadana Movement which seeks to provide women with opportunity and direction to achieve their rightful place in society. This is achieved mainly by strengthening the role of the mother in the family and by empowering them with knowledge and skills to become more self reliant in addressing their economic, social, political and spiritual concerns.