Sarvodayaâ€™s Vishva Sama Samadhi – Universal Peace Meditation â€“ in Anuradhapuraâ€™s sacred city on 2nd October was a great success and significant achievement. The morning started with the Sarvodaya â€œFamily Gatheringâ€ with thousands of people participating as the buses, mini-vans and even tractors kept on arriving. 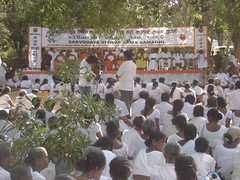 By 3pm, the entire 4.5 km of sacred land around the 2,500-year old Samadhi Buddha statue had been filled, nearing the target of a million people. 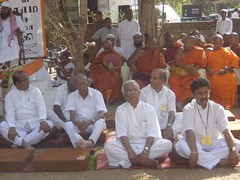 In a calm atmosphere of hope and peace, thousands of teenage Sarvodaya Shanthi Sena (Peace Brigade) volunteers helped to direct the crowds and manned first aid tents. All age groups were represented from young children to elders, many of whom had traveled for many hours from the length and breadth of Sri Lanka. 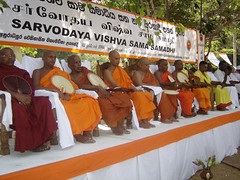 Messages of support were read out from His Excellency The President of Sri Lanka and the Leader of the Opposition in addition to Dr Deepak Chopra. The Rev. Michael Beckwith, Founder & Senior Minister of Agape International Spiritual Centre in Los Angeles, gave a message in person. 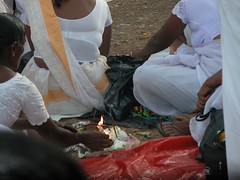 At 3pm, five religious representatives (Buddhist, Hindu, Catholic, Muslim and Baâ€™hai) each made a short speech and gave their blessings â€“ the multi-religious nature of the day was a key part of its success and impact. 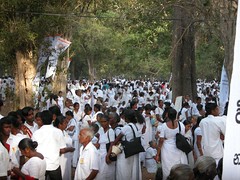 Complete silence fell on the site as Dr A.T. Ariyaratne began the one-hour meditation at 4pm. 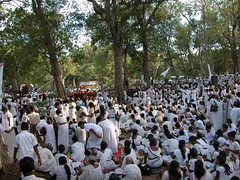 The event closed with a one-hour Buddha pujaâ€”a Buddhist ceremony involving the lighting of lamps. It was beautiful to see hundreds of coconut-oil lamps flickering in the approaching dusk. 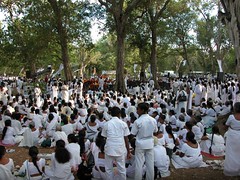 Shanthi Sena volunteers stayed behind to clean up, disassembling the stage, picking up trash, emptying barrels and removing the multitude of decorations from the sacred area. In less than an hour, the site was clean, as if the event had never happened. But it had, and you could see the effects of it on every face. 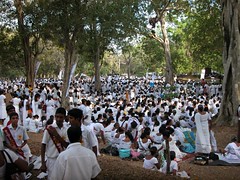