Quest for Peace amidst growing violence

Sarvodaya has always stood for non-violence and peace. Through out its 5 decades of existence it has worked hard for bringing individual and community awakening through an integrated approach to development and peace. 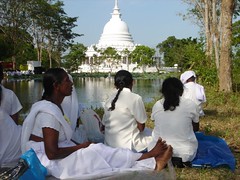 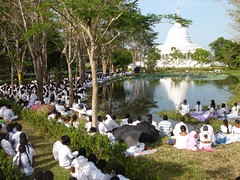 The past few months Sri Lanka has witnessed unprecedented violence making the 4 year old fragile ceasefire between the Government of Sri Lanka and the LTTE a mere document in paper. Sarvodaya not only continued with various actions at different levels to diffuse a situation of heightened violence and human suffering, but worked hard without much coverage in the mainstream media in the country (which is by and large encouraging a “war agenda” promoting further violence), to promote inter-community understanding while helping to meet the urgent needs of the affected communities. 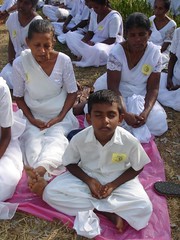 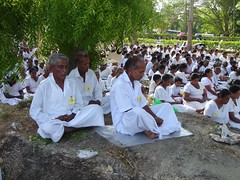 On 8th July 2006, Sarvodaya once again reflected the commitment of the ordinary citizens of Sri Lanka towards peace. Led by Dr.A.T.Ariyaratne, Founder – Leader of Sarvodaya, 8000 people belonging to all ethnic communities held a peace meditation in Ampara, the troubled Eastern Province of Sri Lanka. The Sarvodaya Peace Meditation was conducted at the Japanese Peace Pagoda Temple in the Ampara town. Since the escalation of violence early this year, Sarvodaya has stepped up its peace efforts with a renewed commitment to its holistic approach to peace building based on the 3 spheres consciousness, economics and power. Peace meditations are considered a key element of affecting the consciousness and since January this year, over 30,000 people have participated Sarvodaya organized peace meditations in various parts of the country. 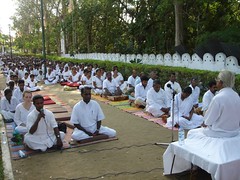 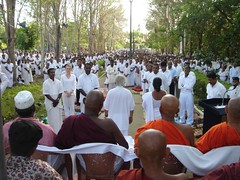 The Ampara meditation was significant in that it was held at a time of rising tensions in the area with increased security concerns restricting movement of people even within the district. The thousands of people belonging to Sinhala, Tamil and Muslim villages from far corners of the district, travelling long distances spending their own money to organize the transport to attend the meditation, demonstrated their commitment to peace and non-violence. This event is one in a series of district level peace meditations that would culminate in the Vishva Sama Samadhi (Universal Peace Meditation) to be attended by a million people on 2nd October 2006 in the sacred city of Anuradhapura. 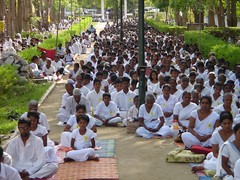 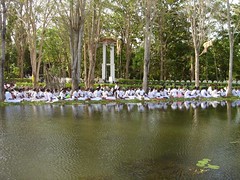