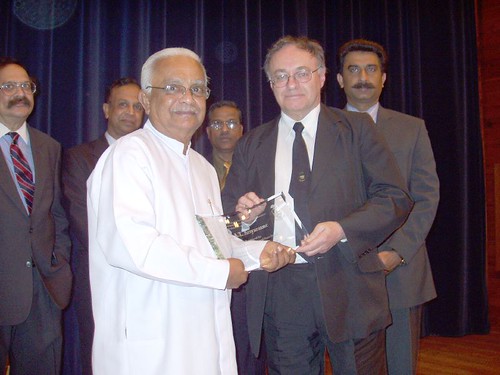 Amid reports of suicide bombings and shelling going on in Sri Lanka, a diminutive man steps up on a podium at the George Ignatieff theatre at the University of Toronto in Canada. He is surrounded by the ambassadors and councilors for Sri Lanka, India and Pakistan; respected academics and University Presidents; all assembled in solemn procession to celebrate a lifetime of enlightened service to a country and people badly in need not only of the barest necessities of life, but a compassionate vision that strives toward unity and acceptance of one and all. In his soft yet vibrant voice he reminds us all that before attempting to change the world, we must change ourselves: â€œMettaâ€ he tells us, is the practice of compassionate action towards all living beings. â€œRespect all lifeâ€, says Dr. A.T. Ariyaratne and the tragic irony of his words is not lost on us.

Introducing Dr. Ariyaratne earlier in his visit, Prof. Chelva Kanaganayakam reminded us of an apt anecdote in which a world champion footballer from South Africa, on receiving his cup from Nelson Mandela said, â€œOur efforts pale in comparison to what you have achievedâ€. Prof. Kanaganayakam spoke for all of us when he affirmed that Dr. Ariyaratneâ€™s efforts to rejuvenate Sri Lankan society through Sarvodaya have achieved what so many scholars, activists and politicians have tried to accomplish in the post independence years. Dr. Ariyaratne does where others simply try.

True to Sarvodayaâ€™s cause and vision, hardly a day passed by during his visit to Toronto in which Dr. Ariyaratne was not out there meeting people and calling for change. Mrs. Ariyaratne, his wife, and honorary Secretary of the Sarvodaya Suwasetha Sewa Society, the welfare arm of the Sarvodaya Movement, likewise answered questions on the changing status of women, and reminded us of the need to empower women within the deeply troubled social and psychological atmosphere of Sri Lanka today. As scholars, students, professors and members from the community took turns to laud and quiz him, Dr. Ari responded with equanimity, his answers drawn from nearly 50 years of service through the Sarvodaya movement and the wisdom of having witnessed the transformation that common people can bring about through the collective practice of a more compassionate way of life. As questions streamed in about the rights of women; the impact of transnational corporations on development; the collapse of psycho-social sphere due to war and economic deprivation; the faltering peace process; and so much more, Dr. Ariyaratne answered each in detail, concluding however, with his simple philosophy: â€œLife is always hard, so we must all work harderâ€.

Dr. Ariyaratneâ€™s philosophy is bearing fruit as the vision of Sarvodaya spreads through the so-called first world, giving birth to Sarvodaya USA and now, Sarvodaya Canada. What better testament to its universal, non-sectarian vision of an enlightened community, than to see people of all races, creeds and colors uniting in the cause of transforming consciousness through compassionate action?

As Sri Lanka founders in the face of unmitigated violence, we can all collectively hope that on the 2nd of October 2006, the meditation of one million common people and well wishers from around the world that Dr. Ari has mobilized, will drown out the sounds of bombs and shells with the euphony of shared, peaceful, active silence.