In the midst of traditional drumming and music, President Mahinda Rajapakse declared open the Lagoswatta village that Sarvodaya constructed for fifty-five Tsunami-affected families from three villages in Kalutara. Designed and implemented as a model of participatory development towards environmental sustainability, the village is an innovative concept in Sri Lanka. It was financed by Sarvodaya as well as American Jewish Joint Distribution Committee (AJJDC), the United Nations Environmental Program (UNEP) and the Asia Pacific Forum for Environment and Development (APFED). 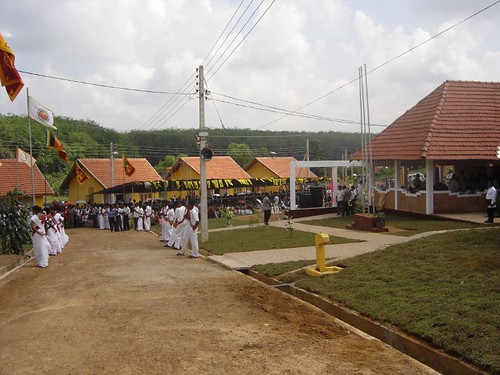 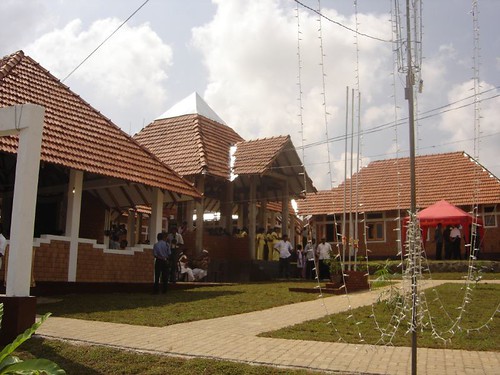 President Rajapakse and the Founder-President of Sarvodaya, Dr. A.T. Ariyaratne ceremonially opened the village by unveiling the plaque of the housing project, hoisting flags, and handing over the keys of the houses to the new owners. President Rajapakse, Dr. Ariyaratne, and other dignitaries personally cut ribbons and took part in religious blessings in two of the houses while the rest of the house keys were handed over on the main stage. The celebrations were enlivened by dancers and the band from Kalutara Balika Vidyalaya. 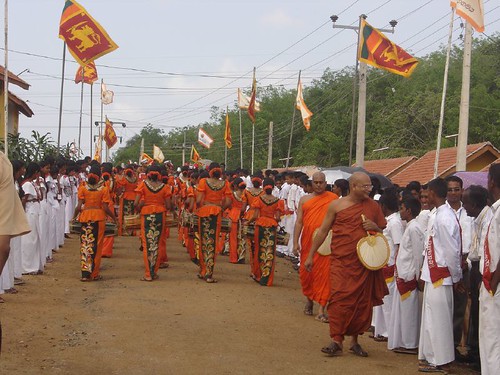 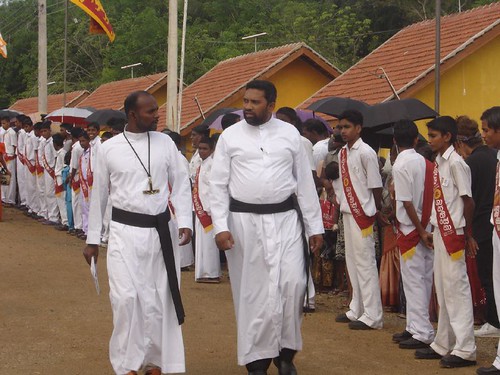 Lagoswatta is located in Kalutara district about five kilometers from the sea on a piece of land granted by the government. Placed on a gentle five-acre slope bordering rice fields, the main feature of the village is fifty-five eco-friendly houses, a multi-purpose community center, ample water resources, a comprehensive road network, and expansive green areas. Construction work was launched on 4th April 2005. 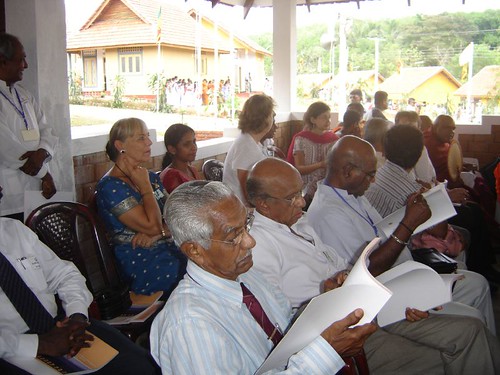 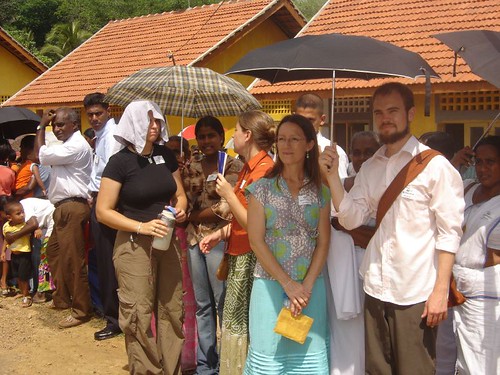 Each house consists of two bedrooms, a living room, a kitchen, and sanitation facilities that altogether encompass a space of 500 square feet. The houses were built according to the UNEP guidelines for construction of eco-houses in Tsunami-affected areas in Asia. The houses and the community center are provided with electricity through solar panels. Fourteen rainwater harvesting tanks, five drinking wells, and two bathing wells have also been erected in the village. The project has established a Subterra system, a natural method for wastewater treatment, and set up a recycling process for solid waste material. One of the medium-sized playgrounds under the â€œPost-Tsunami Healing and Recovery through Recreation and Playâ€ program funded by the AJJDC, USAID, and the Bush-Clinton Tsunami Fund, another Sarvodaya post-Tsunami project, is also located in Lagoswatta. The project also includes schemes for social mobilization and livelihood support. 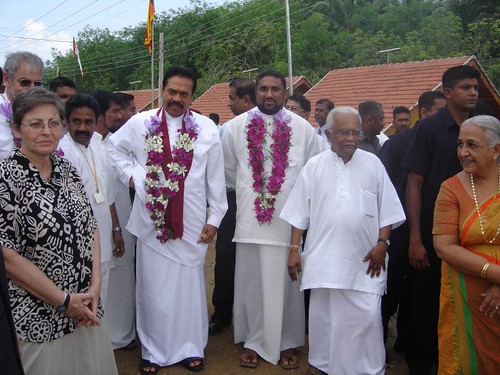 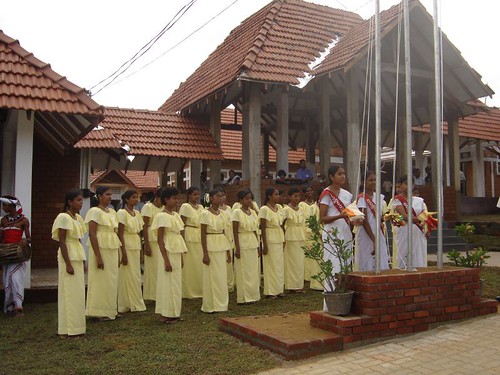 An eco-village is a community striving to create a cooperative lifestyle in harmony with its local environment. An important feature of such a village is the development and refinement of social and ecological tools like consensus decision-making, inter-generational care, alternative economic models, whole systems design, permaculture practices, renewable energy systems, and alternative modes of education. The vision of the Lagoswatta project is the development of a self-sufficient ecological way of life according to which a group of people of similar intention can live together. The project will ensure that human activities are harmlessly integrated into the natural world and will act an education ground for future eco-village development. The overall development objective of the pilot project is to test an innovative model that is environmentally friendly and utilizes participatory planning at the village level thereby empowering communities to effectively make their own decisions. This will lead towards environmentally-sustainable development.

The village was constructed with the generous support of the Government Agent and other government officials in the Kalutara district and the dedication of Sarvodaya personnel from the Kalutara District Center as well as the Headquarters. These individuals will continue to support the village to ensure its long-term sustainability. The completion of this post-Tsunami reconstruction project is a model for collaborative work between the government and nongovernmental organizations to uplift and rebuild the lives of Tsunami-affected folk. 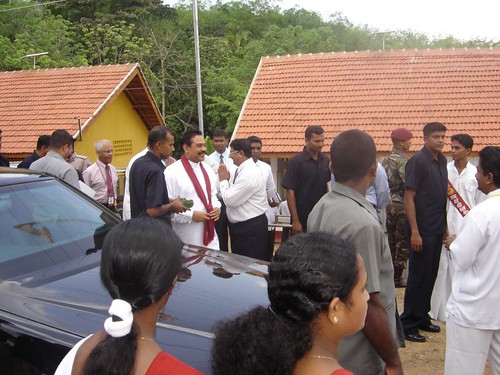 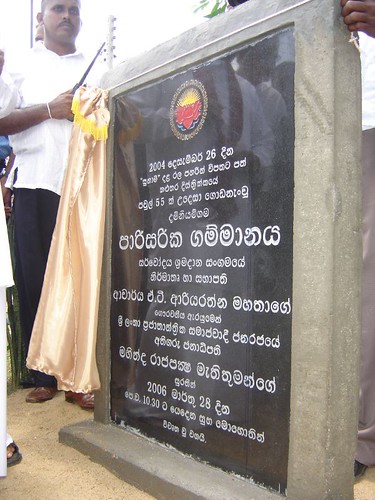 The handing-over ceremony was kicked off by religious blessings from Buddhist and Christian priests and a welcome song from the students of Kalutara Balika Vidyalaya. The District Secretary of Kalutara, Mr. S. Hapuarachchi, and the Executive Director of Sarvodaya, Dr. Vinya Ariyaratne, made welcome addresses while Dr. Schnieder and Mr. Shresta also spoke.
Minister Abeygunawardena who took the stage next spoke on how Kalutara district suffered great damage due to the Tsunami and it was blessed to be helped by Dr. Ariyaratne and Sarvodaya. He talked about his admiration for the commitment and enthusiasm of Dr. Vinya Ariyaratne and the Sarvodaya staff and said that he was sure they had the blessings and good wishes of the beneficiaries. The minister went onto speak about the eco-village concept and how much Sarvodaya had stuck to eco-friendly principles in building Lagoswatta. He told the people of the village that it was now their responsibility to keep up the village on the same guidelines. He concluded by stating that there was still a lot more reconstruction work to be done in Kalutara and requested that Sarvodaya continue supporting the district. 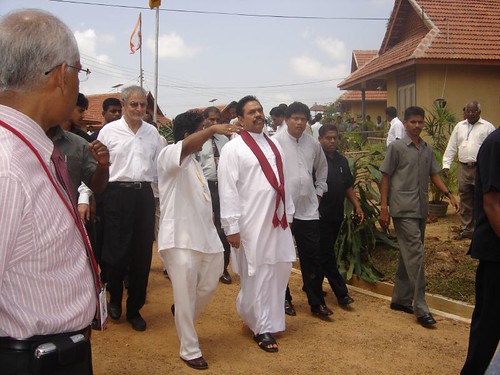 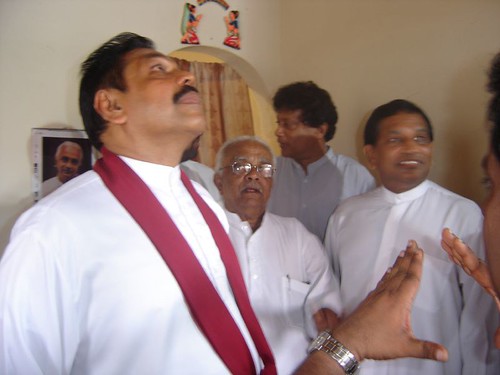 Dr. Ariyaratne who made the next speech said that Sarvodaya did not hold its one-year Tsunami commemoration activities with the presence of political leaders because the movement felt that celebrations were inappropriate for the occasion. However, it is important to celebrate on a day when a new village is handed over to beneficiaries and is such a landmark in their process of recovery from the tidal wave. This is why the movement invited the Sri Lankan President to grace the occasion. Dr. Ariyaratne said he supported the presidentâ€™s effort to develop Sri Lanka and install permanent peace in the country through his Mahinda Chinthanaya process and he hoped that Sarvodaya would be able to support the president and his government in development work in the years to come. He stated that Sarvodaya very much trusted in the value of belief and the thought process and that if everyone really believed in it, peace would dawn in the country and it would develop.

He said that Sarvodaya is based on the belief that there is a spiritual factor behind everything. The Tsunami was not just nature unleashing destruction on humankind, but a result of human beings violating cosmic law. This is why it is imperative that humans learn to live in harmony with their environment and the spirit of nature and this is why the village is called â€œDamniyamgamaâ€: for people to remember the importance of living in harmony with their surroundings while respecting nature. 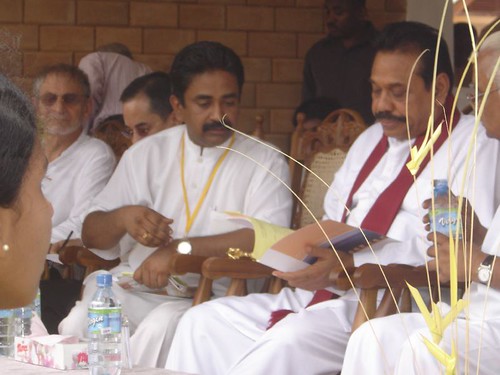 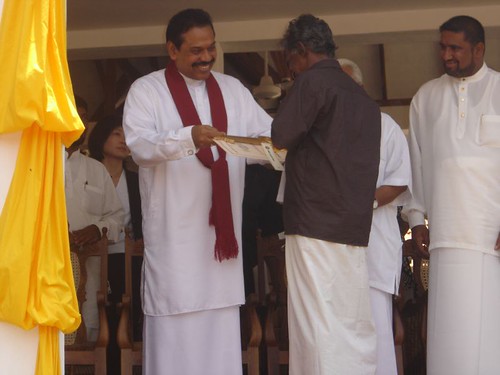 Dr. Ariyaratne said that the village had been built utilizing about seventy million rupees and most of this had come from the money that many ordinary citizens from around the world including young children had collected in small quantities and made into a very large contribution. The movement has published a comprehensive report on this and the process with which it utilized this funding could be seen in this book.

He went onto address the people of the village and asked them to live in the village as one family. He requested that they not bring in alcohol and drugs and other evil things into the village and asked them to live with the concepts with which the place was constructed. He said that Sarvodaya will continue to work with the village in the future and ensure its sustainability. He concluded his address by thanking the Sarvodaya staff who coordinated the construction efforts and the Kalutara Government Agent and other government officers who supported the project.

President Rajapakse who made the final speech started by speaking on the importance of constructing villages such as this, which endeavored to live in harmony with the environment. He said that it was important to take this into consideration when building all Tsunami houses in the country. 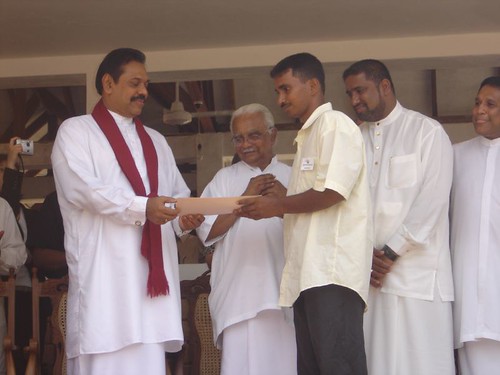 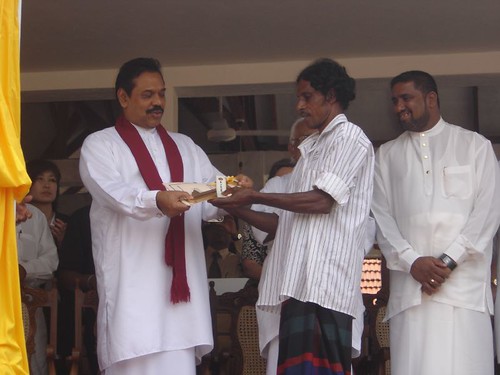 He spoke about how Sarvodaya managed to build this work by attracting support from NGOs from other countries and commended them for utilizing this funding for the benefit of Sri Lankans. He said that he need not talk about the movementâ€™s experience with disaster management and community development and it is this that had enabled it to do so much post-Tsunami reconstruction work. The most important factor is that Sarvodaya does not just concentrate on building houses or other constructions, but on developing personalities. This is a concept that everyone should remember. Constructing a building alone is not enough. Instead there should be development of more fundamental aspects of the beneficiaries of the construction.

He agreed with Dr. Ariyaratne that natural disasters happen when human beings live against nature and that the Tsunami was a prime example of this. However, at the same time it was important for the government to recognize its responsibility to protect people from such disasters and help them recover from them. The government is now setting up processes to address this. 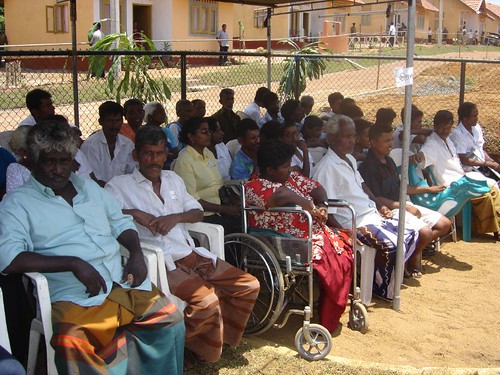 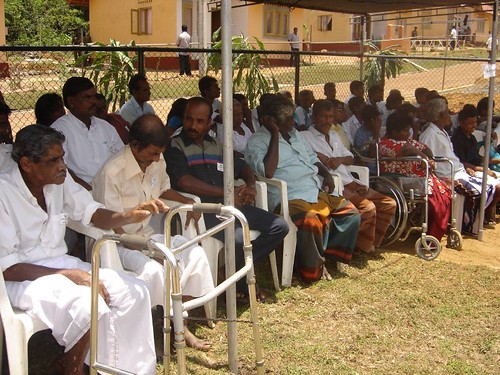 President Rajapakse went on to talk about the Tsunami and how it had brought about acts of human kindness. Temples, churches, and kovils had thrown open their premises for the affected communities who had lost their homes. Such an outpouring of support had been possible because of the islandâ€™s 2,500-year old culture that is based on empathy and goodness. He asked the villagers of Lagoswatta to protect these values and protect the hamlet as a blessed ground by keeping away all evil from the place. He said that his Mahinda Chinthanaya too, supports these concepts of living in harmony not only with each other, but also the environment.

He said that it has to be admitted that the government has failed to take care of the people who were affected by the Tsunami in all parts of the country. He felt that the government had fallen far behind in this responsibility and this was why last week, he had called together the Government Agents of all the affected areas and handed them power to take care of this work. The president went on to speak about how many NGOs who had promised to do much reconstruction work and been entrusted with government land on which to do so had failed in their work. He said that the government was now in the process of putting together a report on this and it would soon be released for the perusal of not only Sri Lankans, but the foreign publics that provide the funding for the running of these organizations. The president said that in contrast to the broken promises of these other organizations, Sarvodaya had accomplished a lot of work especially considering it relatively smaller size and strength. He thanked the movement for their untiring efforts and promised to continue to support it. He concluded his speech by calling on everyone to work together for the development of the country and the recovery of all Tsunami-affected people by rising above party politics and not dividing according to color.