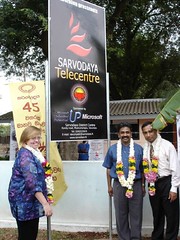 villages in the island. Microsoft financed this under its Unlimited Potential Programme, a global initiative which focuses on improving lifelong learning for underserved young people and adults by providing technology skills through community-based technology learning centres. The company believes that by supplying technical skills training to underserved individuals they can partner with service organisations to create social and economic opportunities that can alter the lives of people and transform communities.

Under the program, Microsoft provided equipment, training and training material, operational funding, and scholarships for courses to start new Telecentres in Vavuniya, Badulla, Galle, Kalutara, Hambantota, and Kandy. This brought the number of Sarvodaya District Telecentres that have been established throughout the island to twelve. The new centres, which are equipped with computers, printers, scanners, and an internet connection, have been established in twelve districts. Ten Village Information Centers (VICs) will be created in each of these districts and this would create a total of 120 VICs in Sri Lanka. To date, sixty-five percent of this target has been achieved. The Microsoft programme also funded the upgrading of the existing telecentres at Anuradhapura, Kurunegala, Gampaha, Puttlam, Badulla, and Kandy.

Computer training programs are being conducted at the telecentres as planned. 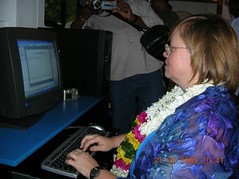 These training courses include basic computer education for children and adults as well as more advanced training in MS Office, networking, and graphic design. The Unlimited Potential Scholarship Program provides 528 scholarships to underprivileged rural youth for computer courses. This program allows people, who would have previously been unable to move ahead in their careers due to lack of funds for education, to benefit from computer training and make significant advances in their lives. Many young job seekers are benefiting from this training, which will help them find jobs related to ICT or start their own businesses. Young people who have finished their studies and are facing difficulties in finding employment can thereby benefit immensely from this program. This will eventually reduce the number of unemployed youth, which will contribute to development of the nation. Familiarizing village youth with ICT also enables their own village community to benefit from the external resources that become available to them through ICT and the internet.

The District Telecentres have implemented the following training programmes,

The Telecentres have organized a specific set of courses to train children and youth. 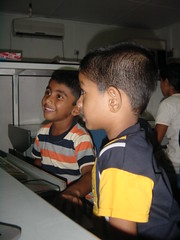 Courses in the first three stages last three months each while those of the fourth stage have a duration of four months. The telecentres charge a fee for each of these courses, but a quarter to a third of the places in each course is covered by scholarships.

A decision was made to have only a maximum ten children in a course in each of the first three stages and twenty in the courses of the final stage. The ICT unit has published special books for the course participants of each of the first three stages. The book for the first stage covers the English alphabet and an introduction to the computer. The second stage teaches the basics about the computer and its different parts while the third stage takes this knowledge to a further level.

The main objective of these programs is the development of awareness among rural youth regarding IT. 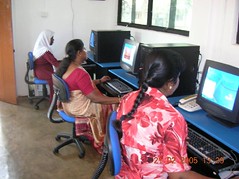 A majority of the courses were a blend of traditional didactic training and computer-based training. The syllabuses consisted of both theoretical and practical aspects of operating the computer. The programmes are conducted at the ITU and District Telecentres in twelve districts.

Both District Telecentres (TCs) and Village Information Centers (VICs) are invaluable storehouses of information that help villagers make informed decisions and gain economic benefits. The various types of information include that on agriculture, microfinance and loans, contact information for doctors, government offices, schools, etc. This data is being used by all types of people including school children, teachers, farmers, businesspeople, government officers, and housewives.

The Telecentre Project contributes to the grassroots peace process, by bringing people from all ethnicities under one roof, where they can gain training, exchange knowledge, and develop friendships.