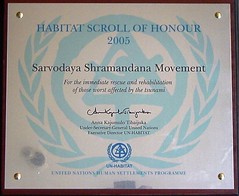 On October 3rd, Sarvodaya Shramadana Sangamaya was awarded the Habitat Scroll of Honor award, the UNâ€™s highest prize in the field of human settlement and shelter. The award is granted annually by the United Nations Human Settlement Program and Sarvodaya was among eight recipients for the year 2005. Sarvodaya was recognized for its development work in villages with particular regard to its massive post-Tsunami reconstruction work.

In a ceremony held in Jakarta, Indonesia to mark World Habitat Day, Mrs. Udani Mendis, the Acting Executive Director, and Mr. Saman Algoda, the Finance Director, received the award on behalf of the organization. In a speech at the ceremony, Mrs. Mendis described Sarvodayaâ€™s work with special emphasis on the movementâ€™s focus on eradicating poverty through social, economic, and technological empowerment of people. She described how the organization had been working for almost fifty years in this endeavor of â€œsarvodayaâ€ or â€œawakening of allâ€ and had thus far reached almost 15,000 villages throughout the island. 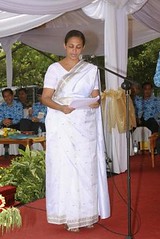 Mrs. Mendis elaborated on Sarvodayaâ€™s relief and recovery work in the aftermath of the Tsunami. Her speech covered all aspects of the organizationâ€™s work from the Center for Disaster Management that it set up within one hour of the calamity through its initial relief work all the way to the long-term programs in which it is now engaged. She described how the organization has placed an emphasis on getting the Tsunami-survivors to engage as much as possible in the work and provided cash for their contributions.

Mrs. Mendis said that none of this Tsunami recovery work would have been possible without the support that Sarvodaya has received from local and international donors and volunteers. She said that this support gave the much-needed encouragement and incentive for the organization to continue with its â€˜5Râ€™ recovery program, Relief, Rehabilitation, Reconstruction, Reconciliation, and Reawakening. â€œIn the face of an extraordinary tragedy,â€ Mrs. Mendis concluded, â€œAnd in many cases the loss of their own homes, friends, and families, all of our staff, villagers, friends, and international volunteers rallied together around Sarvodaya without hesitation and worked selflessly as a team day and night to help the affected communities through the immediate relief program of Sarvodaya. This selfless and generous team effort helped us to win this award today, and I dedicate it to everyone involved.â€ 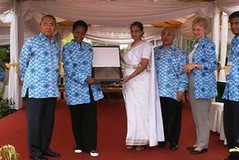 Mrs. Mendis and Mr. Algoda received the award on behalf of Dr. A.T. Ariyaratne, the Founder-President, and Dr. Vinya Ariyaratne, the Executive Director of Sarvodaya. The award was presented by Ms. Anna K. Tibaijuka, the Executive Director of UN Habitat and the Under-Secretary-General of the UN, in a ceremony that was attended by Mr. Ong Keng Yong, the Secretary-General of ASEAN, and various officials from the Indonesian government.

Ms. Tibaijuka spoke on the importance of recognizing World Habitat Day and eradicating poverty, achieving environmental sustainability and universal primary education, empowering women, reducing child mortality, improving maternal health, and fighting AIDS, malaria, and other diseases in this world. â€œUN Habitat is launching the global celebration of World Habitat Day in Jakarta to remind the world that countless thousands of homes were destroyed last December by the Tsunami killer wave,â€ she said, â€œAs we come together like never before for the Tsunami victims, so must we join hands and forces in making urban poverty history. We have to confront the â€œsoft tsunamisâ€ of our world, such as HIV/AIDS, hunger, and waterborne diseases that kill thousands of victims.â€

The Habitat Scroll of Honor is the UNâ€™s highest award for outstanding contributions by individuals, organizations, governments, or projects in the fields of shelter provision, emphasizing the plight of the homeless, developing human settlement and the quality of urban life, and leadership in post-conflict reconstruction. The only previous time that a Sri Lankan organization received the award was when the National Housing Authority was presented with it in 1991.