The 4th International Greenscout Jamboree was held between the 30th August and 2nd September 2005 at Sarvodaya Bhikku Training Center Pathakade, in the Ratnapura District.

Greenscout Movement was initiated by the Japan Asia Friendship Society (JAFS), a longstanding partner of Sarvodaya which promotes intercultural understanding and youth development in the Asian region.

The Jumboree was attended by 27 foreign and 63 Sri Lanka participants. The countries represented at the Jumboree were Japan (12), India (4), Philippines (2), Ache Indonesia (2), Cambodia (1). Thailand (1), Nepal (3).Canada/Bangaladesh (2). There was a staff of 15 to facilitate the various services. The theme was â€œThe effects of Modern Development Trends on Bio-Diversity â€“ Today and tomorrowâ€.

Opening ceremony was held on 30th August which was attended by Rev.Kimihiko Murakami, President of JAFS and Dr. A.T.Ariyaratne, Founder President of Sarvodaya who was the Chief Guest. The dayâ€™s proceedings began with lighting of the Traditional Oil Lamp and the administering of Pan Sil by the head priest and two minutes of meditation for all to join in reflecting on their religions. 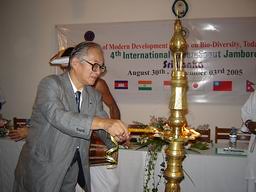 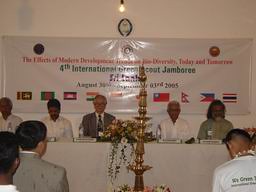 Dr. Vinya Ariyaratne, Executive Director made the welcome speech followed by Dr.A.T.Ariyaratneâ€™s speech as the Chief guest. They both stressed on the importance of the Greenscout Movement which was started by Rev Murakami and that being another of his humanitarian acts. Sarvodaya which had long links with JAFS was in full accord with the aims and objectives of the Green Scout Movement. It fitted well with the Bio-Diversity conservation programmes and initiatives taken to safe guard the environment. They also thanked Sarvodaya Shanti Sena Movement for accepting the invitation to host the Jamboree. Rev Murakami expressed similar sentiments in his speech from the chair. After the inauguration the key note address was made by an eminent environmentalist known here and abroad â€“ Professor Sarath Kotagama, the Head of the Faculty of Zoology at the University of Colombo. 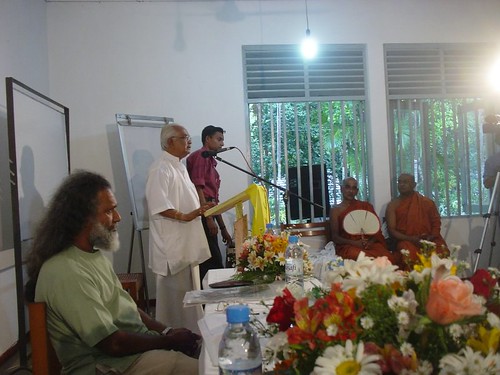 His theme was â€œThe effect of modern development trends on Bio-diversity â€“ Today and tomorrowâ€. He drew many examples to explain his points of view. He explained that there is a close collaboration with environment and the people. The beginnings, the progress and the present position of this combination was explained. The genetic, species, and the eco system diversities were well explained. Similarities and differences were brought out. How the future reproductive system could be changed was another issue, He Stressed He went on to describe fully the genetically modified organisms (also called genetically engineered) a plant, animal or micro organism that is created by means that overcome natural boundaries, genetic engineering involves crossing species that could not breed in nature. He went on to explain the effects of genetically modified food and how it affects people for the good and the bad. Soya been, corn, canola etc. are some GMO food that can cause many ill-effects. His lecture evinced much interest and opened new vistas bringing to the open many myths propogated by commercial interests.

In the next two days the participants deliberated on the subject matter and came out with a declaration for follow up action. All the participants then attended a Shramadana Camp in a village, Henetigala, to experience the village development concepts and strategies of Sarvodaya. 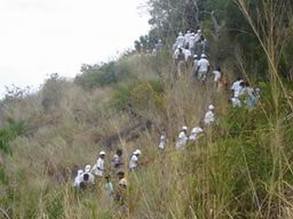 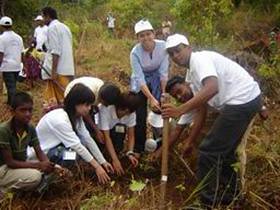