There is a light in all of usâ€¦we just need to share it. This is the belief of Sarvodaya and its Womenâ€™s Movement; hence a nationwide project named â€˜In Loving Memoryâ€™ will commemorate the first year anniversary of the tsunami. 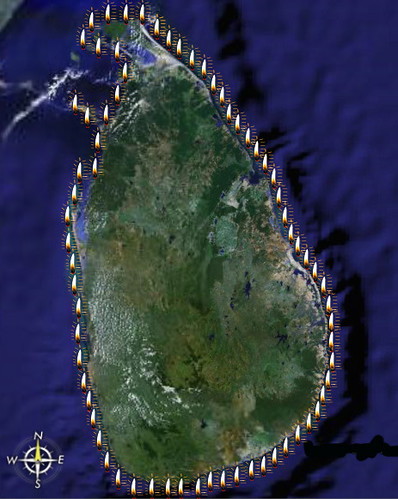 The project aims to create a ring of light around the entire coastline of Sri Lanka at 7pm on 26 December 2005 and so unite all citizens, NGOâ€™s and overseas visitors in commemorating the loss of thirty five thousand lives in the tsunami. It is an event conceived to embrace all religious and ethnic beliefs.

A minimum of forty thousand luminary lanterns in respect of each life lost will be handmade by the women survivors in the coastal villages supported by Sarvodaya Womenâ€™s Movement and distributed free of charge to the bereaved. The project is compatible with the Movementâ€™s urgency to provide psycho social support as well as empower Tsunami affected women through skills development and livelihood support.

The lanterns will be made of simple materials. A craft paper bag, silk screened with the message â€˜In Loving Memoryâ€™ in three languages with a space for the family to write the name of the loved one departed and a final sentiment of â€˜ We remember and we careâ€™. Sarvodaya requests individuals and families to light their lanterns on the seashore at 7pm in unison with others. They could also organize a community lantern lighting ceremony in their neighbourhood or spend a few minutes in meditation in the privacy of their homes.

Sarvodaya hopes to sell at least eight thousand lanterns priced at one hundred rupees each to cover the cost of a minimum of thirty two thousand lanterns for free distribution to the bereaved. An invitation is extended to individuals and organizations interested in sponsoring the project either partially or totally.
Sarvodaya invites all to share their own personal light on this day.